Having been a motorcycle rider for some years now and having been the proud owner of all manner of different manufacturers and models I am still unsure if I qualify to be described as a “real biker“. The Dictionary defines the term as meaning “someone who rides a motorcycle normally describing those in an organized group or a gang.” and whilst the action of riding a motorcycle is necessary do all riders qualify as bikers and are all members of groups of motorbike riders gang members. At the risk of complicating the issue is biker not a way of life rather than a concept. Is it an attitude rather than a pastime. So the three points we are addressing are as follows. 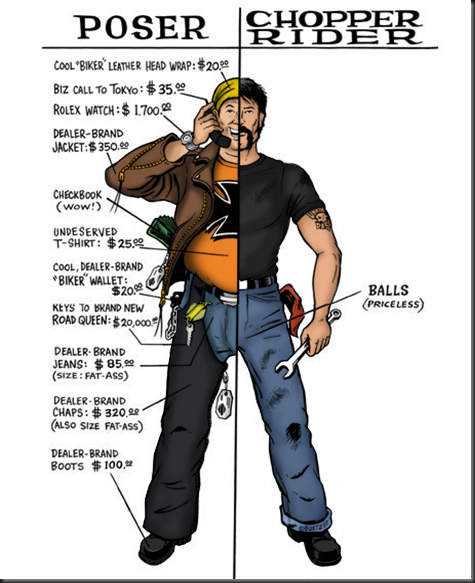 They are the “The 1 % ‘ers”. Surely another term for non conformists. For those who are unsure of the origins of this term it comes from a statement that 99 % of bikers are law abiding citizens implying that one percent are illegal miscreants, incidentally the alleged statement is denied by the American Motorcycle Association who are credited with its issue. So the alleged branding as non-conventional, not members of the club, wrongdoers and criminals, was suggested in the years after world war two and the stigma has remained. If they are bikers they are thugs, if they don’t belong to an authorized ORGANIZED club they are outlaws. If they wear denims and leathers they are law breakers. Thus such labels -Real Bikers – are born.

The truth is easier to define, these are not people who won’t conform, they are individuals who refuse to be ordered to be like the crowd. They have their own code of conduct, live by their own concept of right and wrong and create , to some degree, their own culture.

Obviously there are true outlaws and gangsters within this group but there are more in the conformists and mainstream society than within the true biker culture.

What bikers aren’t is more important, they are not conformists but most conform, they are not members of the normal working community, although most have regular employment. They only ride Harleys and have tattoos and greasy denims and if you dare to buy a Gold Wing or Sports Bike you cease to be a biker. They customize their own American bike and carry out all the modifications themselves with the object of getting a machine that is faster, shinier and more outrageous than any other. They never wear a helmet and carry out all your own maintenance, tuning and there is nothing you don’t know about your machine. Oh and it is never called a bike. That’s what people think Bikers really are.

Most have regular jobs and families and 2.4 children and are not Wild Children of Destiny. The closest they get to SONS OF ANARCHY is in front of their 42″ flat screen TV with the wife,beers and popcorn. They ride for enjoyment, so mainly in good weather and they don’t like to be organized. They just like to get in touch with a few like minded souls and all go in the same direction at the same time, not for AMA organized meetings. Their loyalty is to their family and by inclusion that group of friends that they tour round with on their motorcycle trips.

They swap tips on maintenance and repair and pass on the details of mechanics and dealerships who helped them with work on their bike. There is no upper age limit to this breed of riders,most are parents with kids raring to follow dad, many are grandparents and have been doing it for as long as they can remember, some have just started because it has always been their dream and they have managed to finally achieve it, they had the dream since they were 20 but afforded it when they retired.

They are nonconformists who conform, because they can – when it suits them.

They are individuals who travel in groups because they want to. They are gang members ,with a small g, who want to be members when they want to, to conform when they choose to and to live their recreational time as they want to, not as others expect them to.

They see themselves as individuals who can be members of a crowd, loners who belong, people who enjoy riding and being with other riders.

They see themselves as normal.

So what Are Real Bikers?

You could write volumes on this but what is apparent is that they have their own set of names for items, they don’t have cars they have cages, their pride and joy motorcycle is a scoot but most importantly their dialect is only understood by other “members”, like minded people who share the same philosophy and live by their own unwritten rules. They look out for others who share their interests, watch out for the newcomers, help those who need it and leave alone those who don’t. Let them do what they do as long as it doesn’t affect others. I think the following story illustrates the concept in a proper manner and makes it easier for non bikers to grasp. I’ve made a post about that, feel free to read it after.

One day as a guy was driving home from work he saw a youngster,well younger than him, pushing his cruiser down the road,obviously a non runner and after the driver stopped to see if he could help it became apparent that the bike was not going to run without the ministrations of a mechanic with more detailed knowledge than either of them. The driver of the car then drove several miles home and got his trailer and some securing webbing and returned to load the non running Honda onto the trailer and then to take both rider and machine to their home.

It was obvious that nobody would consider the owner of the broken machine a biker,he was new to biking,confused when the machine didn’t work and totally unable to extricate himself from the problem he faced. Obviously a beginner with a lot to learn.

Once the destination had been reached and the recalcitrant machine unloaded payment was offered and refused and a rather confused broken bike owner told how he had just bought the bike to go on a trip with his friends, a totally new experience for him and he fetched the photos of the trip for examination and bubbled over with his enthusiasm of all the new experiences he had met.

How exciting it was to mix with “real bikers’ ‘ and how welcoming they were to a true newbie, a tenderfoot hanging on their every word and listening with awe to their tales of trips and places visited. He explained that he was recently divorced and somewhat at a loss as this was totally new ground for him, to be alone but with friends, mixing with new people who would obviously know that he was totally ignorant of the rules of biking.

He could not get over the fact that he was accepted and in many cases welcomed into the biking community and how awesome this felt to him and how the trip and the mixing with like minded strangers had been a rebirth for him after his recent sad patch.It became obvious to that he was explaining what many have struggled to grasp. He was introducing a community that had existed for many years and somehow members,like myself, had lost sight of the meaning of. The free lifestyle had been accepted as so normal that all concept of its enormity had become lost. He was explaining all the essential points that made this a lifestyle choice and the very reason that it had existed,and grown, for so many years.

After the conversation began to tail off the Honda rider asked his rescuer if he was a biker and with no hesitation at all he answered yes I am a biker. His new found enthusiasm had awakened in him all that was good about biking, the comradeship, the company, the thrill of being alone and exploring, the excitement of being among a band of bikes rolling down the road to somewhere purely for the sake of being there. The enjoyment of sitting with like minded people around a diner table and working out the schedule for tomorrow,where are we going, what are we going to do, who are we going to visit.

If it needs explaining you probably won’t understand.

The truth of biking is that it is a way of life, there are no rules only guide lines, look after your fellow bikers, always have the group at heart, be aware of the needs of other group members but do this as a normal way of life not as a chore to add load to your day. Live for yourself whilst riding, enjoy the freedom and enjoy the sights and sounds, escape from the mundane restrictions of normal life, for now you are a biker enjoying the open road and meeting up with like minded people who understand why you do what you do.

When you do all this, you really are a Real Biker.